Hasids get Hip to Guerilla Advertising 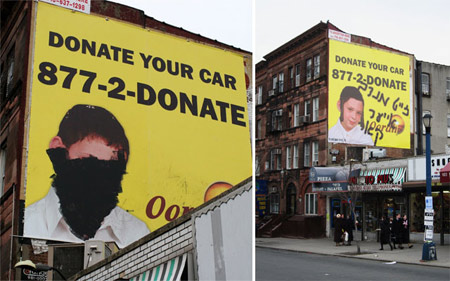 In the East Williamsberg, where the hipsters and the hasids (somewhat) peacefully coexist, Oorah, a childrenâ€™s charity began targeting the Satmar Jews there, as they are considered generous donors. Their first billboard come into contact with a bit of vandalism. The billboard reborn, reshot with Payot and a higher buttoned shirt was subject to further graffitti – this time in Hebrew letters.

Catch is, the words repeat in Yiddish the message of the billboard ‘Zeit menadev aer car’ “Donate your car” thus giving an unofficial seal of approval to the organization to the community.

â€œWe thought that injecting humor might also defuse tension,â€ said Rabbi Eli Mintz, the director of Oorah, â€œand perhaps even work to our advantage as a marketing tool, and bring in more cars as a result.â€

He may be right. The agency said that it had been getting been getting positive responses and that the billboard was being talked about in the streets and in the shuls.

Guerilla marketing! Nice! Turner Broadcasting and the Cartoon Network gladly parted with $2 million after a campaign to promote the new Aqua Teen Hunger Force went awry after LED panel animations were mistaken for bombs in Boston. That $2 million fine generated publicity worth at least ten times that amount in “free” publicity. It’s just a matter of time before Kiruv and other Jewish organizations get savvy to such an equation – I can’t wait to see how that manifests itself…