Home / Jewlicious / A Brief History of Their Fearless Leader

A Brief History of Their Fearless Leader 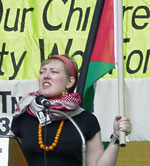 A Brooklyn-based friend of mine recently sent me an email I begged her to let me publish. My friend will remain anonymous out of fear that Charlotte Kates will bring her friends over and throw rocks at at the author’s apartment. But here is a brief history of the origins of radical leftista Charlotte Kates!

in other news..I checked out jewlicious and noticed this post:

This went right by my apartment! I remember hearing all this yelling and I was like, “oh it’s gotta be some angry black brothas..” I looked outside and low ‘n behold iz Palestinian supporters (mostly who are white kids). In fact, it reminded me that I went to college w/a girl named Charlotte Kates, an absolute genius ( perfect scores on her SATs and LSATS). We were on student government together at Douglass. Like many middle/upper white class white kids with no culture or tradition, she picked a new identity every year out of guilt of being a part of the majority. In ’97 she was scientologist, in ’99 she was gay, in ’00 she was Latina w/an accent, golden hoop earrings and a curious spray on tan, and in ’01, before I left for Australia, when zionism = racism on our college campus, my last words to Charlotte were, “Charlotte, it’s okay to hate politics, and criticize politicians..but don’t hate this country and don’t hate this country’s people. Go visit, go see how amazing it is. ” She never wrote another email to me again and last I heard she went to law school..lo and behold, the maniacal voice behind the microphone is none other than pasty white nutball herself…. video footage (c/o LGF).

From believing that “billions of years ago, in a past life, an evil space-based government had forced her to “zap” her mother with a ray gun” to “Palestinian resistance in all its forms has been a very powerful tool of justice.” Ahh, the wacky world of extremists without native culture.