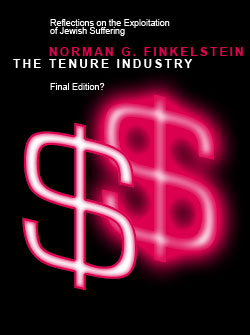 Oh. Poor Normie. Didn’t get his tenure at DePaul. Of course you’ve read all about that on Jewlicious. What you haven’t read yet are other reasons why Finkelstein may have been denied tenure. Campus Watch, reproduced an article from The Chronicle of Higher Education (requires paid subscription) in it’s entirety, lest they be accused of bias. This article, written by one Elizabeth Farrell (Jewess? Zionette?) reported the following:

Mr. Finkelstein was abruptly placed on paid administrative leave late last month, just 10 days before the beginning of the fall semester (The Chronicle, August 27). The terms of the leave forbid Mr. Finkelstein from teaching his scheduled classes or entering his office on the campus… The university did not publicly state a reason for placing Mr. Finkelstein on leave at the time, but now says it was because of disruptive behavior described in the memos, which were first reported by the Chicago Tribune in an article published on Monday… A university spokeswoman declined to comment on the memos on Monday, but said they “appear to be authentic.” The spokeswoman, Denise Mattson, also confirmed that Mr. Finkelstein was put on leave “because of unacceptable behavior exhibited on the campus in June.” … According to one of the memos, dated June 26 and written by DePaul’s provost, Helmut P. Epp, that behavior included two incidents in which Mr. Finkelstein refused to leave the office of a dean or a professor, prompting them to call DePaul’s office of public safety. In a third instance, the memo says, Mr. Finkelstein followed Charles S. Suchar, the dean of liberal arts and sciences, to an elevator and blocked the elevator door from closing. He did not relent until Mr. Suchar threatened to call the police… “As provost, I cannot ignore the faculty’s complaints about Professor Finkelstein’s behavior nor their requests that they be protected from his abuse,” Mr. Epp wrote in the memo.

Of course Finkelstein claims that this is just some ex post facto justification for his continued uh… martyrdom. His fans will continue to support him and this denial of tenure thing is just going to make him even more in demand as a highly paid (reportedly $25,000 per speaking engagement) champion of his bizarro brand of Justice and Freedom. Oy.